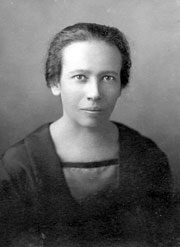 When Paulina Foote was invited by the Mennonite Brethren Board of Foreign Missions to serve as a missionary teacher in China, she accepted the assignment as confirmation of her own sense of God’s calling to serve in a foreign land. During the summer of 1922 she gathered her belongings and prepared to say good-bye to family and friends in Oklahoma.

She was eager to go, but uncertain about what God was calling her to do. Her home church was preparing to put up a large tent for an ordination service and farewell festivities, but what would it mean for her to be ordained as a minister of the gospel? Paulina recalled those days in her memoir, God’s Hand Over My Nineteen Years in China. She wrote:

“The thought of an ordination gave me struggles. Women in our conference do not preach. Why should I be ordained if I could not proclaim the Gospel to those who had not heard it? Women were permitted to tell the Gospel to women and children. What if men would come to my women’s and children’s meetings? Should I stop proclaiming the Gospel message? Did not the men have a right to hear the Word of God? The church had asked Pastor Jacob Reimer of Bessie, Oklahoma, and Elder Johann Foth of the Ebenfeld Church . . . near Hillsboro, Kansas, to officiate at my ordination. Both were considered to be of the most conservative in the whole conference.

What a surprise to me when Elder Foth in his sermon at the ordination proved with Scripture passages that women should preach. He spoke about Mary Magdalene, who had followed Christ to the cross, who also took note of the place where he was buried while the disciples left Him. Peter had even denied Him. She was the first of Christ’s followers who was at the grave on the resurrection morning. She was the first to tell the greatest story of all stories that Christ had arisen from the dead. Christ Himself commanded her to carry the news to the disciples, the men, and to Peter who had failed Him. My problem about the ordination was solved. My later experience proved that this was of the Lord.”

Paulina Foote spent nineteen years in China preaching the good news of the resurrection. During the first few years she worked primarily as a teacher for the missionary children, but that changed when many of the missionaries were forced to leave their work. The political situation in those years was often difficult. When missionaries faced opposition from communist forces in 1927, she was one of three Mennonite Brethren women who stayed in China when other missionaries were evacuated. Even after the other missionaries returned, Paulina continued her work with the Chinese people.

Paulina studied hard to learn the difficult Mandarin language so that she could teach and preach more effectively. She even adopted Chinese dress so that people would not be distracted by her Western clothes. As she traveled from village to village to conduct meetings, she would often ride on rickshaws or sit on top of a large wheelbarrow that held her supplies and bedroll.

When Paulina and her companions, often a local Bible woman or evangelist, would arrive in a village, they would ask the children to let their parents know there was going to be a meeting. Then they would start singing. Men, women and children would gather to hear them tell the good news about Jesus. Paulina would ask them questions after her message to make sure that they understood what she was saying. Many people were converted in these meetings and many small churches were begun.

During World War II, the missionaries were caught in the turmoil between the opposing Japanese and Chinese armies. Many of them were put in detention camps. Paulina escaped capture, and for many months helped manage the mission affairs and wrote letters on behalf of the missionaries who were being held.

Eventually she decided to go to a part of China where she would be safe. The trip was often difficult but she made it safely and began to work in the mission field there. When the soldiers threatened to disrupt this work, Paulina moved again. This trip took her eighty-three days as she moved through the countryside trying to stay out of the way of the soldiers. Wherever she went, she found Christians willing to hide her and help her escape. In turn, she held meetings and encouraged people in their faith. God kept her safe and wherever she went, Paulina Foote faithfully preached the gospel message.