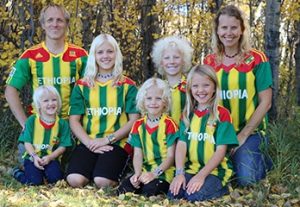 Angela and Rolf Kruse and their five children (four daughters and one son) have lived on Gesses mountain in Ethiopia among the Gumuz people for the past five years. They recently returned to Canada after 17 years of ministry in Ethiopia among Sudanese refugees and tribal people.

Angela shared this story with Bearing Witness as an example of the costs (for both insiders and outsiders) associated with challenging cultural norms that are contrary to the gospel.

One morning a dear Christian friend arrived at my door weeping.

Egya relayed the news that a group of men had arrived at her home at sunrise demanding that her husband’s debt be paid immediately. Egya’s husband, Shima, knew that he could not meet their demands, so he handed over their eleven-year-old daughter, Eychagni, to satisfy his debt.

When there is a dispute among the Gumuz, the elders decide upon a form of compensation that must be paid in order to resolve the dispute. This has been a highly effective way of maintaining peace in the community.

Usually compensation is in the form of livestock, but poor families often have no choice but to give a daughter as a way of paying off the debt. When girls are given away to relieve debts, however, their status as beloved creations made in the image of God is undermined.

Though Shima was working to pay for his debt, community elders demanded his daughter Eychagni as immediate payment.

I knew about Shima’s debt, so I had spoken with him about his daughter’s blessing and his role as protector and father. Shima quickly agreed to work for my husband and had been faithfully saving his money. He had already paid the court one of the three cows and several goats necessary to satisfy the debt.

When Egya showed up at my home and told me that the elders had taken Eychagni, I was filled with grief and anger.

The elders knew Shima was working for my husband to pay his debt. They had taken advantage of my husband’s absence to demand the payment, and they knew Eyga was powerless to get involved.

As a white missionary woman known in the community, I prayed that God would grant me access to Eychagni and allow me to bring her safely home. I strode across the road and into a village where I am well known. I had no idea what I would find. Would she be bound? Guarded? Abused? She sat on an old bamboo woven bed, in a darkened hut, quietly guarded by a young man of the village.

I told the guard that the elders or chief of the village could come and talk to me, but I would take Eychagni home. I took her by the hand, and we walked home. No one stopped me.

An hour later, Chief Wakay and two community elders showed up at my door, AK-47 rifles slung over their shoulders. We occasionally have opportunities to engage with community elders and chiefs regarding cultural practices. It was an opportunity to share the gospel of Jesus Christ and to remind these elders of God’s justice and His love for women; we talked for two hours.

The elders were unbending, but they allowed me to care for Eychagni until Shima returned.

In the court case that followed Shima’s return, my husband spoke out against the payment of daughters. He implored them to show mercy in their court cases and to recognize the pain and suffering this practice brings to their girls.

“Girls are not your wealth,” he said. “They are not like goats or cattle. They are a blessing. They are to be loved and protected by the men in their lives.  When you bless them, love and cherish them, they will bless you in return.”

Eychagni’s life was redeemed with the payment of two more cows, but she is not safe. The next time her father has a debt, she or one of her sisters may be offered again. If not her, then another girl in a different village. Without extra income for these subsistence farmers, men often have no choice in how to pay their debts.

Believers in the Gumuz churches recognize the damage this practice inflicts, and there are many women who harbour deep hurt and anger for the ways their daughters are used as compensation in these disputes.

Yet they feel trapped by the limitations of their culture.

In our discussions with church elders and evangelists who are first generation believers, they have said:

[This practice] is bad, but it is not easy to change. We have no power as Christians because the community elders make all the decisions along with the witchdoctors. If they give an instruction, it must be followed. It is very difficult, because our people are always in debt to others.

In the past, they have taken revenge on others and this often resulted in death. We believe it is wrong to give girls to pay for debts, but we have no money and we have no power. If there is no money and there are no cows, then we must pay with a life. If a man’s life is taken for a debt, it will begin a war. If a girl is given as a gift, then peace returns. It is not right, but it is better than war.

This is where we, as outsiders, can be helpful. In Ethiopia the Gumuz people have been despised for their diet, for their culture and for their dark skin (and were previously taken as slaves by wealthy Ethiopians). Yet there are many beautiful aspects of their culture: their generosity, music, emotional and physical strength, and their ability to survive under extremely harsh circumstances.

As outsiders, we are able to recognize and affirm this beauty, while also beginning a conversation that allows the people to see the good and evil in their own culture through the eyes of the Creator.

We are encouraged that some believers are beginning to defend their daughters against this practice.

Eygafok, a believer, refused to turn over her daughter as payment for a debt her husband had been ordered to pay by the community elders. The family did not have the five cows required by the courts to settle the debt, but Eygafok’s daughter wept bitterly and spoke of suicide each time the agreement was discussed. We were able to help mediate in that situation, and the daughter was saved.

Now our people do not steal and kill like they used to. Once all the previous debts are paid for, this practice will end. I refused to give my daughter, but most women have no choice. They have no one they can ask for help and so their daughter is torn from their arms….even sometimes an infant daughter. They are powerless. If a debt is not paid, then someone will be killed, and this will begin feuding again between the clans.

We have urged believers to refuse to receive the payment of girls and instead forgive the debt, but there are still only a handful of believers in each of the clans. Court cases are settled by the community, not by individuals, so we continue to pray that the gospel will take deep root in these communities.

We pray that our Gumuz friends will find ways of keeping the peace without sacrificing their girls and that they will see their girls as created in God’s image–deserving of love, honour, and protection.

The Bearing Witness Project enables Anabaptist communities worldwide to share their stories of costly discipleship in ways that inspire greater faithfulness to Jesus Christ and strengthen the church’s unity.

If you have a story to tell, please share it!